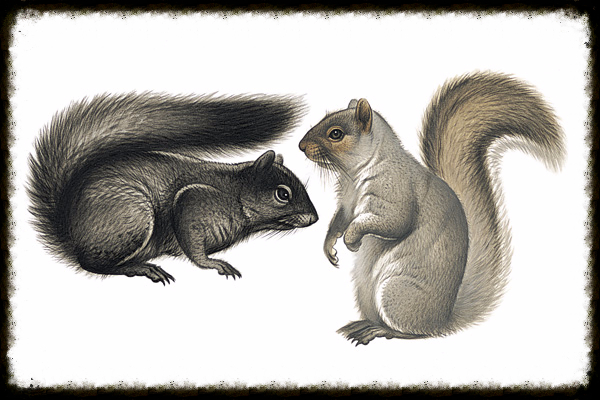 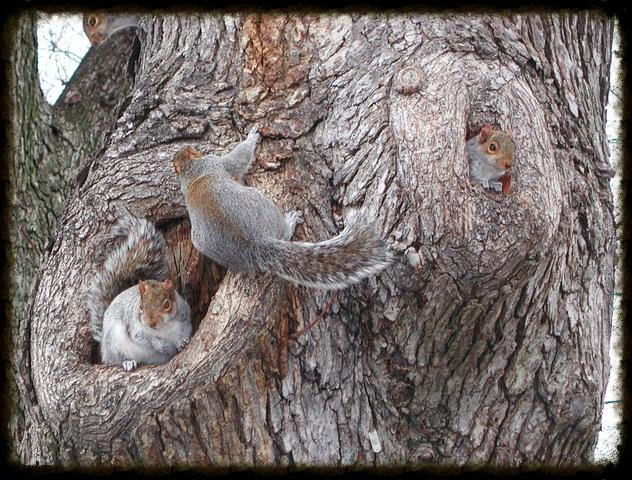 As the name suggests, the eastern gray squirrel has predominantly gray fur, but it can have a brownish color. It has a usual white underside as compared to the typical brownish-orange underside of the fox squirrel. It has a large bushy tail. Particularly in urban situations where the risk of predation is reduced, both white- and black-colored individuals are quite often found. The melanistic form, which is almost entirely black, is predominant in certain populations and in certain geographic areas, such as in large parts of southeastern Canada. Genetic variations within these include individuals with black tails and black-colored squirrels with white tails (see Tree squirrel for more information on these color variations).

The tracks of an eastern gray squirrel are difficult to distinguish from the related fox squirrel and Abert's squirrel, though the latter's range is almost entirely different from the gray's. Like all squirrels, the eastern gray shows four fingers on the front feet and five on the hind feet. The hind foot-pad is often not visible in the track. When bounding or moving at speed, the front foot tracks will be behind the hind foot tracks. The bounding stride can be two to three feet long. 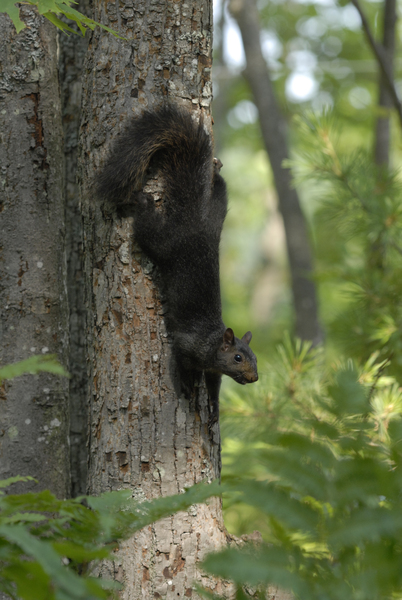 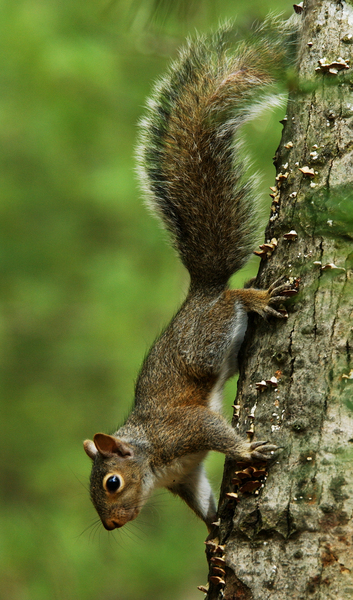 Like many members of the family Sciuridae, the eastern gray squirrel is a scatter-hoarder; it hoards food in numerous small caches for later recovery. Some caches are quite temporary, especially those made near the site of a sudden abundance of food which can be retrieved within hours or days for reburial in a more secure site. Others are more permanent and are not retrieved until months later. Each squirrel is estimated to make several thousand caches each season. The squirrels have very accurate spatial memory for the locations of these caches, and use distant and nearby landmarks to retrieve them. Smell is used once the squirrel is within a few inches of the cache.

Squirrels have been known to pretend to bury the object if they feel that they are being watched. They do this by preparing the spot as usual, for instance digging a hole or widening a crack, miming the placement of the food, while actually concealing it in their mouths, and then covering up the "cache" as if they had deposited the object.

The eastern gray squirrel is one of very few mammalian species that can descend a tree head-first. It does this by turning its feet so the claws of its hind paws are backward pointing and can grip the tree bark.

Eastern gray squirrels build a type of nest, known as a "drey", in the forks of trees, consisting mainly of dry leaves and twigs. Males and females may share the same nest for short times during the breeding season and during cold winter spells squirrels may share a drey to stay warm. They may also nest in the attic or exterior walls of a house, where they may be regarded as pests, and as fire hazards due to their habit of gnawing on electrical cables (see Tree squirrel for more on interactions with humans). In addition, squirrels may inhabit a permanent tree den hollowed out in the trunk or a large branch of a tree.

Eastern gray squirrels are crepuscular, or more active during the early and late hours of the day, and tend to avoid the heat in the middle of a summer day. They do not hibernate. 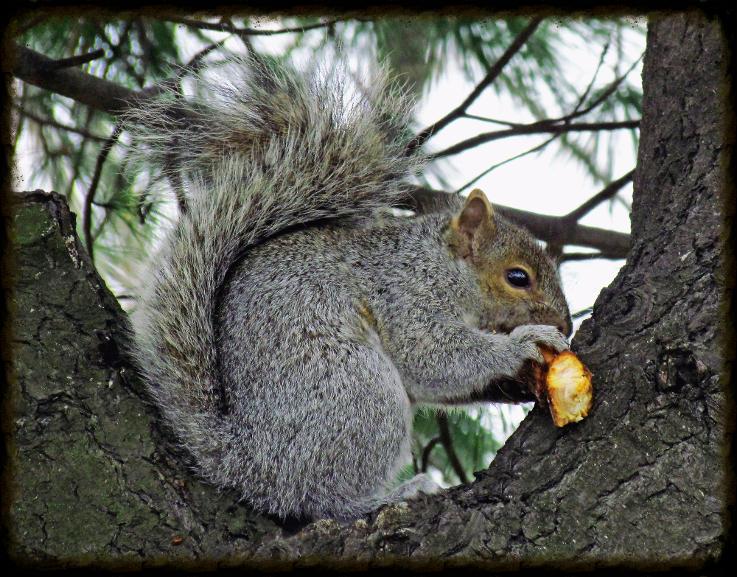 Eastern gray squirrels generally prefer constructing their dens upon large tree branches and within the hollow trunks of trees. They also have been known to take shelter within abandoned bird nests. The dens are usually lined with moss plants, thistledown, dried grass, and feathers. These perhaps provide and assist in the insulation of the den, used to reduce heat loss. A cover to the den is usually built afterwards.

Close to human settlements, eastern gray squirrels are found in parks and back yards of houses within urban environments and in the farmlands of rural environments. 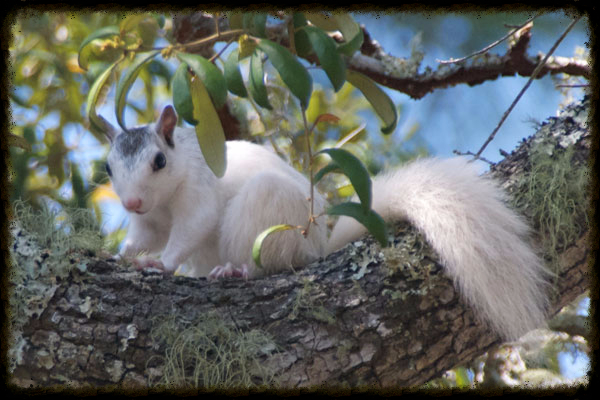 As in most other mammals, communication among eastern gray squirrel individuals involves both vocalizations and posturing. The species has a quite varied repertoire of vocalizations, including a squeak similar to that of a mouse, a low-pitched noise, a chatter, and a raspy "mehr mehr mehr". Other methods of communication include tail-flicking and other gestures, including facial expressions. Tail flicking and the "kuk" or "quaa" call are used to ward off and warn other squirrels about predators as well as to announce when a predator is leaving the area.  Squirrels also make an affectionate coo-purring sound that biologists call the "muk-muk" sound. This is used as a contact sound between a mother and her kits and, in adulthood, by the male when he courts the female during mating season.

The use of vocal and visual communication has been shown to vary by location, based on elements such as noise pollution and the amount of open space. For instance, populations living in large cities generally rely more on the visual signals, due to the generally louder environment with more areas without much visual restriction. However, in heavily wooded areas, vocal signals are used more often due to the presence of less noise and a dense canopy restricting visual range. 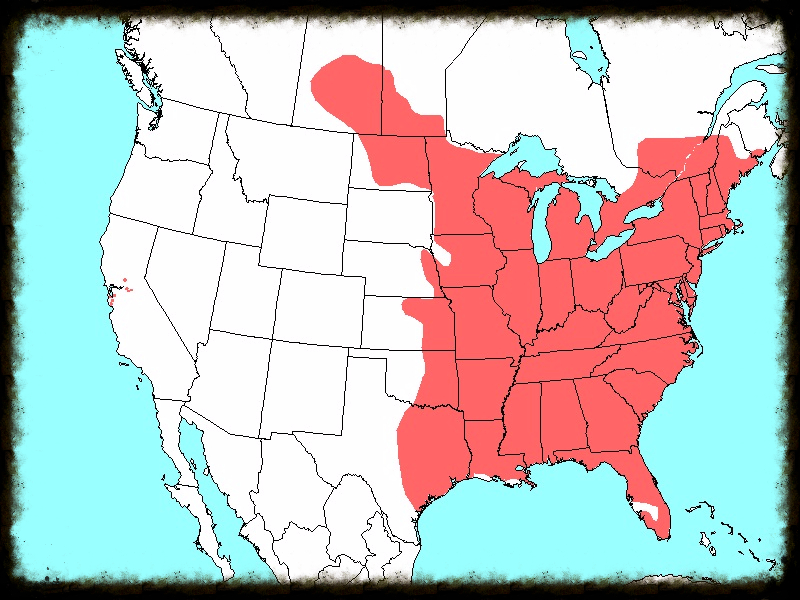 Sciurus carolinensis is native to the eastern and midwestern United States, and to the southerly portions of the eastern provinces of eastern Canada. The native range of the eastern gray squirrel overlaps with that of the fox squirrel (Sciurus niger), with which it is sometimes confused, although the core of the fox squirrel's range is slightly more to the west. The eastern gray squirrel is found from New Brunswick to Manitoba, south to East Texas and Florida. There are breeding eastern gray squirrels in Nova Scotia, but it is not known if this population was introduced or came from natural range expansion. It has also been introduced into Ireland, Britain, Italy, South Africa, and Australia (where it was extirpated by 1973).  Eastern grey squirrels in Europe are a concern because they have displaced some of the native squirrels there.

A prolific and adaptable species, the eastern gray squirrel has been introduced to, and thrives in, several regions of the western United States. It has also been introduced to Britain, where it has spread across the country and has largely displaced the native red squirrel, Sciurus vulgaris. In Ireland, the red squirrel has been displaced in several eastern counties, though it still remains common in the south and west of the country.  There are concerns that such displacement might happen in Italy and that gray squirrels might spread from Italy to other parts of mainland Europe. 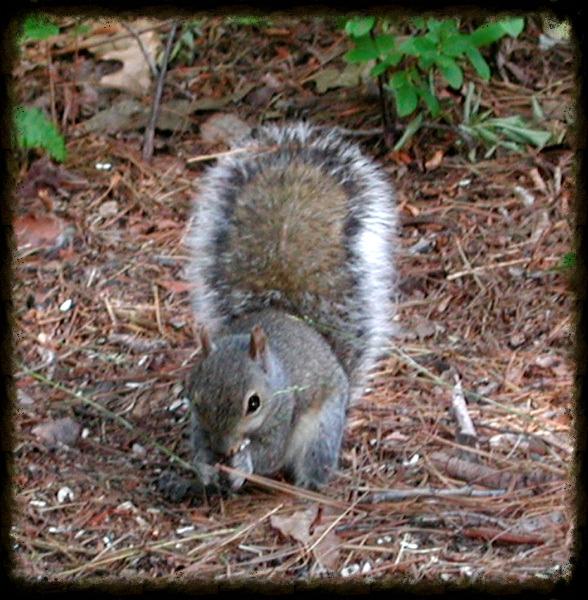 Eastern gray squirrels eat a range of foods, such as tree bark, tree buds, berries, many types of seeds and acorns, walnuts, and other nuts, and some types of fungi found in the forests, including fly agaric mushrooms (Amanita muscaria). They can cause damage by tearing the tree bark and eating the soft cambial tissue underneath. In Europe, sycamore (Acer pseudoplatanus) L. and beech (Fagus sylvatica L.) suffer the greatest damage.

Eastern gray squirrels have a high enough tolerance for humans to inhabit residential neighborhoods and will raid bird feeders for millet, corn, and sunflower seeds. On very rare occasions, when their usual food stores are scarce, eastern gray squirrels will also prey upon insects, frogs, small rodents including other squirrels, and small birds, their eggs and young. They will also gnaw on bones, antlers, and turtle shells – likely as a source of minerals sparse in their normal diet. 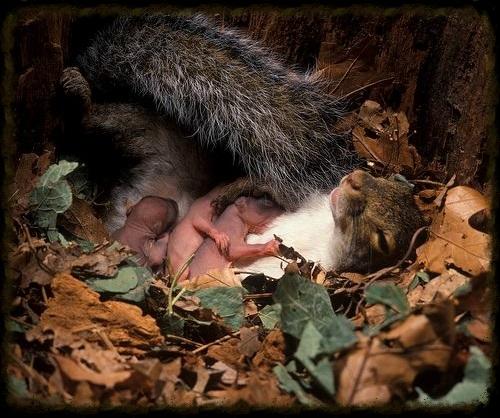 Eastern gray squirrels can breed twice a year, but younger and less experienced mothers will only have a single litter per year in the spring. Depending on forage availability, older and more experienced females may breed again in summer. Their breeding seasons are December to February and May to June, though this is slightly delayed in more northern latitudes. The first litter is born in February or March, the second in June or July. If a female fails to conceive or loses her young to unusually cold weather or predation, she will re-enter estrus and have a later litter. Normally, two to four young are born in each litter, but this number can be as high as six. The gestation period is about 44 days. The young are weaned at around 10 weeks, though some may wean up to four weeks later in the wild. They begin to leave the nest after 12 weeks, with autumn born young often wintering with their mother. Only one in seven squirrel kits will survive to one year of age, with mortality of around 50% for each subsequent year of age.

Eastern gray females can rarely enter estrus as early as five and a half months old, but the females are not normally sexually mature until one year old and will come into estrus the next mating season after they reach maturity. Male Eastern Greys are sexually mature at 18 months of age. These squirrels can live to be 20 years old in captivity, but in the wild live much shorter lives due to predation and the challenges of their habitat. 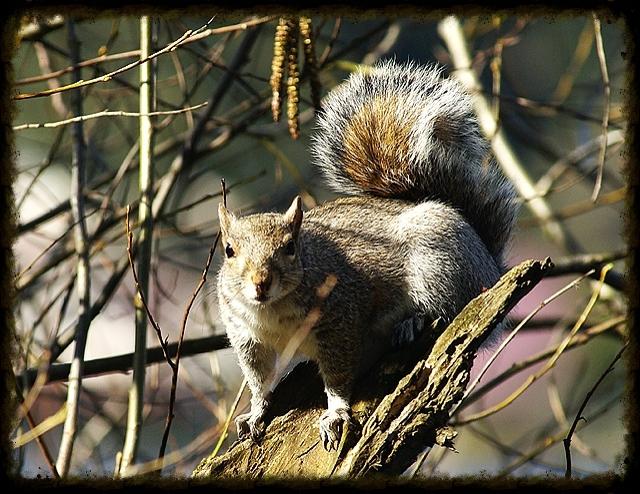 East­ern grey squir­rels are im­por­tant mem­bers of the for­est ecosys­tems in which they live. They eat a lot of seeds. Their seed-caching ac­tiv­i­ties may help dis­perse tree seeds. They may help to dis­trib­ute truf­fle fun­gal spores when they eat truf­fles. They also prey on other an­i­mals in the ecosys­tem where they live. And of course east­ern grey squir­rels are also prey an­i­mals them­selves! They are hosts for par­a­sites such as ticks, fleas, lice, and round­worms.